This is what Max Verstappen had to say about Sim Racing: “It’s the same.” Ok, you can go now, bye…

The developers of these sim racing games have put countless hours into refining their physics. Just look at the Assetto Corsa - that's Italian for racing setup. There’s tire pressure and tire temperature. There’s camber and toe. There are 20 tabs with 100 settings under each.  The real test however is how similar the experience ends up being.

Do entries and exits feel the same with the same car on the same track with the same conditions? Do you develop that sixth sense for when your car is going to slide out? Do you lose yourself in the immersion of the race?

Sim Racing is not just a game for Max Verstappen.

I cut Max short earlier, he went on to say: “You’re also pushing flat out, you need to take it seriously.” He even admits that he struggles to keep up with the best Esports players; that he needs to put in more time to reach the same pace and consistency as his teammates at Team Redline.

That the mental aspect is similar is telling. It means that you can develop a feeling for the configuration that you are driving because things behave in a consistent way. The developers of these games have presented us with an iceberg.

Sticking out above the water we see cars that drive consistently and tracks with character. Underneath the water lie equations for tire heating and suspension models for weight transfer. There is laser scanning to replicate tracks down to 1cm of accuracy and 100 layers of dirt to simulate track degradation during a DiRT Rally 2.0 race.

What this accumulates to is that your focus is on how to gain that extra tenth. However, if you slide out in real life, you can compress your spine leaving you out of action for 6 months. If you slide out in sim racing, you eat a chip and try again. That particular mental part of racing is missing. There’s a certain trust you have to develop in your car that you never have to with sim racing.

“You can also change a lot on the setup.”

I actually cut Max short by quite a bit earlier. He went on to say: “You also need to work together to make it happen because there you can also change a lot on the setup.” Behind the wheel is a driver, and behind the driver, there’s a whole crew.

You can choose your tire compound and set the pressure. Set your gear ratios, set the suspension and the alignment. You’ve got the drivetrain, aerodynamics, brake balance and fuel. Then you drive a lap and it drives horribly, so you put on your engineering hat once more and tweak.

How much does all that cost? Nothing above your setup costs. How much does it cost in the real world? Well, try $1k for a day of karting, over $10k to practice for F3. This is an aspect we can be glad is not simulated! 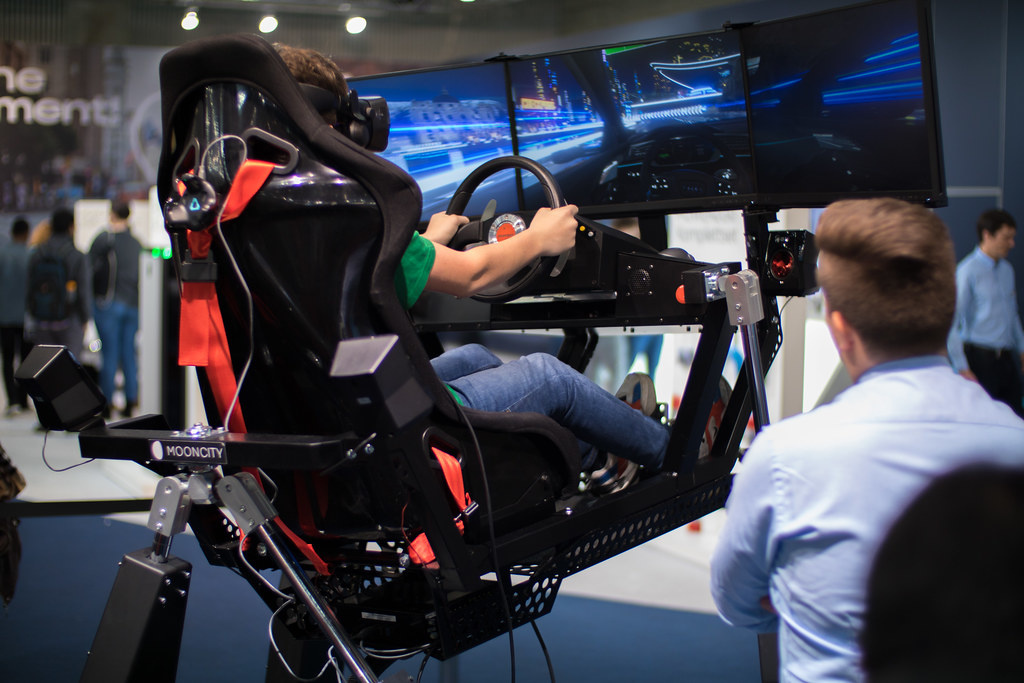 Three screens and hydraulics on the seat, but a wheel and pedals will take you most of the way. (“Gamer playing a racing game on a full motion simulator with multiple screens” by Ivan Radic is licensed under CC BY 2.0.)

Your only costs for Sim Racing are the game itself and your hardware. Your most essential piece of hardware beyond the PC is a wheel with force feedback. That gives you the feel for the car and the track; it reveals the depth of the simulation.

There are many other parts of the sim racing rig anatomy. Pedals are your next best friend (although the force when hitting the brake pedal is not quite the same). And then there are screens: with one screen you’ve got a miserly field of view, with three screens things improve. Nowadays there is also VR that totally immerses you into the race.

Although you can also invest in a setup that moves your seat, you still miss out on the G-forces. You can’t replicate that feeling in the pit of your stomach when you go from zero to a hundred in 4 seconds flat.

Later in the interview, Max mentions that he trains for hours before a sim race. He puts in the hard work to “not look like an idiot.” But it seems that hours in sim racing will stop you from looking like an idiot when it comes to real racing.

There’s the story of Glen McGee who was a professional iRacing sim racer before he, without ever putting on a helmet before, won first prize at a competition against 21 racers trained traditionally and one other iRacer. Igor Fraga went from winning the GT Nations Cup in 2018 to joining the F3 racing grid in 2020.

So if you’re question is: how realistic is sim racing? Your answer is: good enough that it’s the training ground for emerging F1 drivers to prove their mettle and for existing ones to keep fit.